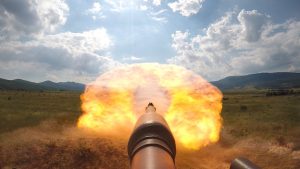 Soldiers with 3rd Battalion, 69th Armor Regiment, participate in a tank shoot rehearsal as preparation for a live-fire tank shoot at Novo Selo Training Area, Bulgaria, June 24. Transported as part of a tank section from Germany to Bulgaria, the Abrams tank will be used by soldiers from 3rd Battalion, 69th Armor Regiment, alongside Bulgarian soldiers from the 6th Brigade Battle Group, during a live-fire exercise during Operation Speed and Power during Kabile 15 as part of Atlantic Resolve-South. Operation Speed and Power is a joint training exercise which demonstrates U.S. Army Europe’s preparedness to deliver strategic effect in Atlantic Resolve-South by showcasing the freedom of movement to maneuver and fire M1A2 Abrams anywhere along the Eastern Flank. This ability enables the NATO allies to defend themselves against all threats, and shows that the alliance remains ready to defend itself anywhere at any time.