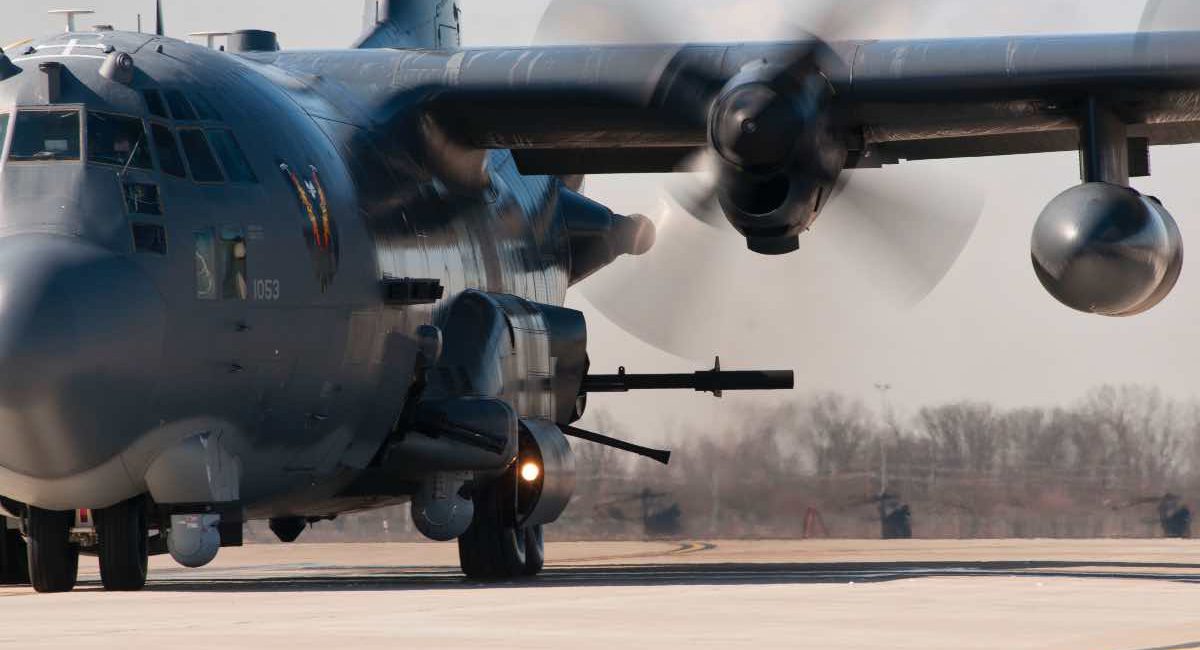 As the Vietnam War came to an end, the dating Douglas AC-47 Spooky gunship needed an upgrade. The U.S. Air Force selected the C-130 Hercules airframe as its new gunship because it could fly faster, longer and at higher altitudes, all while carrying more munition.

Fast forward half a century and the USAF now operates the AC-130U Spooky II for close air support, air interdiction, and armed reconnaissance missions.The AC-130U is the third generation of C-130 gunships. The AC-47 gave way to the AC-119 which debuted in the late 1960s and retired not long after that. The AC-130H “Spectre” gunship, a close relative of the Spooky II, first saw action in 1972. Lockheed introduced the AC-130U in the early 1990s and it remains the attack-cargo preference of the U.S. Air Force to this day.

Four Allison T56-A-15 turboprop engines power this massive aircraft down the runway. With a maximum takeoff weight of over 155,000 pounds – roughly equivalent to 30 U.S. Army Humvee‘s – the Spooky II climbs to 25,000 feet altitude and reaches 300 miles per hour (Mach .4). Each engine contains 4,300 shaft horsepower of thrust.

In the video below, the loadmaster and aerial gunners load various ammunition onto the AC-130U Spooky II. The gunship contains a 40mm L60 Bofors cannon firing at 120 rpm, a 10mm M102 howitzer firing at 6-10 rpm, and a downward-facing 25mm GAU-12/U Gatling gun, firing at 1800 rpm. The Gatling gun is outfitted on the left side of the aircraft.

Both the infrared detection system and the All Light Level System scan a complete 360 degrees, finding the gunship’s targets much faster than previous versions of the C-130 family. There is a laser target designator and rangefinder incorporated into the television. This allows the AC-130U to designate targets for other gunships/aircraft via laser-guided weapons. Additionally, its strike radar provides all-weather/night target acquisition and strike capabilities.

Boeing received an $11.4 million contract from the U.S. Air Force in 2012. The first delivery order under this contract provided parts to complete installation of 25 mm Ammunition Storage and Handling Systems (ASHS) on four AC-130U gunships. There are 17 active AC-130U’s in the U.S. Air Force fleet. Boeing is the prime maintainer of the ASHS since the gunships introduction in 1994. The ASHS feeds ammunition to the 25 mm cannon that is located inside the aircraft’s cargo hold; it is capable of carrying 3,000 rounds.

The AC-130U was active since its delivery in 1994 and remains a vital part of the Air Force efforts today. In 1997, gunships rerouted from Italy provided combat air support for the U.S. and allied ground troops during an evacuation of U.S. noncombatants in Albania and Liberia. The strengthening of U.S. forces in 1998 to persuade Iraq to comply with U.N. weapons inspections included AC-130U’s. More recently, AC-130U aircraft supported Operation Iraqi Freedom/New Dawn. Also, they were employed in support of Operations Enduring Freedom and Resolute Support. AC-130U Spooky II’s played a pivotal role in recent uprisings in the Middle East. Gunships provide direct support of ground troops engaged with enemy forces, interdiction, and armed reconnaissance.

The Department of Defense characterizes the AC-130 gunship like this:

The AC-130 gunship is a devastating display of force and firepower. Through the years the aircraft has been equipped with an array of side-fired cannons, howitzers, mini-guns, wing-mounted missiles and bombs, and laser-guided missiles launched from the rear cargo door – earning it the moniker, ‘The Angel of Death.’

Just as its two predecessors before it, the AC-130U will retire. Most likely, sooner than later. Several of its replacements reached Initial Operating Capability in 2017. The AC-130J Ghostrider, the fourth-generation gunship for the U.S. Air Force, will test and prepare for combat deployment in the next couple of years.

Ghostrider contains a Precision Strike Package, including both 30mm and 105 mm cannons as well as precision-guided munitions of GBU-39 Small Diameter Bombs and AGM-176 Griffin missiles. The 105mm M102 howitzer system fires off 10 50-pound shells per minute with impressive accuracy.