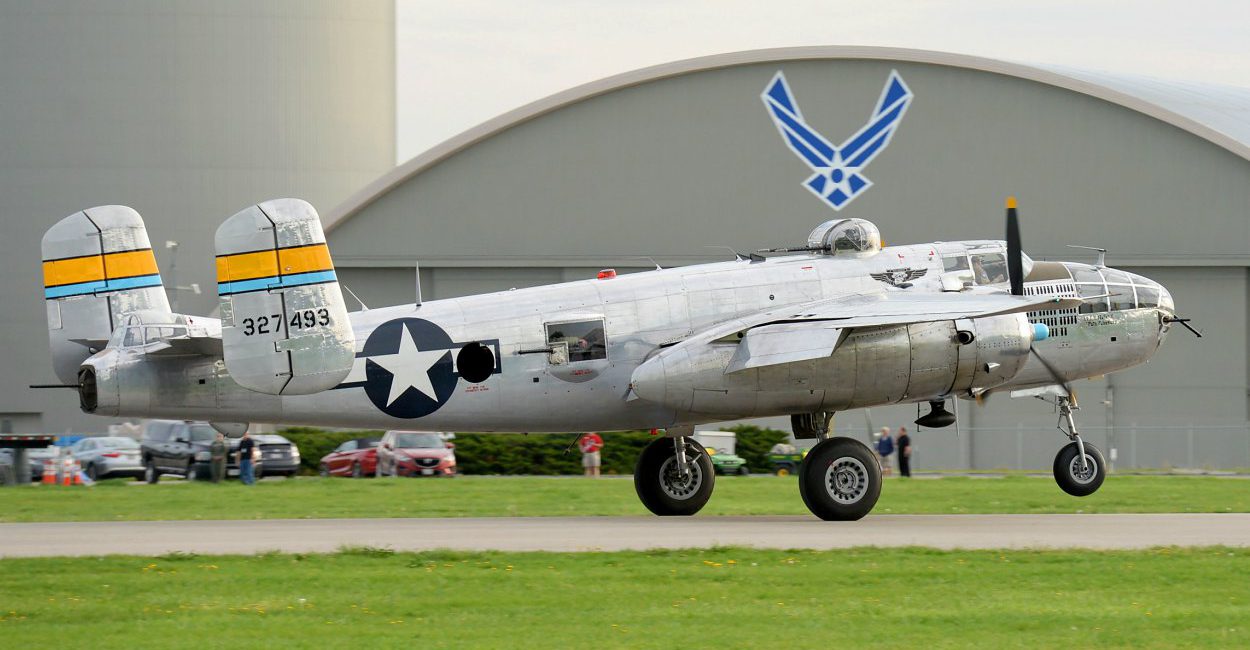 There is perhaps no aircraft more famous, especially during World War II, than the B-25. Its high-rate of production, versatility, and use by several Allied countries makes it one of the most recognizable aircraft in the world.

The North American B-25 Mitchell, named after Brigadier General William “Billy” Mitchell, was a twin-engine bomber. However, over time it became much more than just a bomber. The B-25 was a high-level and low-level bomber, submarine patrol and photo reconnaissance aircraft, and even a fighter. North American Aviation produced just under 10,000 B-25s in a six-year span from 1939-1945.

The first B-25 flew in August of 1940 and the US Army Air Corps accepted its first five planes in February of 1941. From there, it was a race to produce as many as possible. North American Aviation totaled 9,816 B-25s between their two plants in California and Kansas.

The B-25 was originally the NA-40 in the mid-1930s before Wright R-2600 engines were added. The NA-40 was designed and built with France and the UK in mind. These countries had an immediate need for an aircraft with bombing capabilities, seeing as they were well into the war by then. But the European countries decided to purchase the Douglas DB-7 (used as the A-20 by the US) instead.

Even though the NA-40’s sales looked dead in the water, the US Army Air Corps saw a use for the aircraft just a year later. They saw its capabilities as a medium-range bomber and ordered it into production. Because the war was ramping up exponentially, there was no time for test-runs or experimental designs. Any modifications were done during production, and any later versions were produced on the fly.

The B-25 came to fame during the Tokyo Raid of 1942, led by General Jimmy Doolittle.

Several versions of the B-25 existed, most with a unique weapons system. The G model was the first major change to the B-25. It was equipped with a 75mm cannon and two fixed .50-cal. guns in the nose. The J model was the most produced version of the B-25. It was a level bomber, which was the original design, but it included a transparent nose with one flexible and two fixed .50-cal. guns. In the H variant, forward-firing .50-cal. guns were added in the cheek blisters.

The flight crew of a B-25 included a pilot, co-pilot, bombardier, radio operator and a gunner. Two 1,700-hp Wright Cyclone supercharged 14-cylinder radial engines gave the B-25 “Mitchell” a range of over 3,000 miles and a top speed just over 300 miles per hour.

North American Aviation was absorbed by Boeing in 1996.

References:
Air Force
|
Boeing
This content is for members.