For over 30 years, the M2 Bradley Fighting Vehicle has proven its worth for the US Army. Manufactured by BAE Systems, this lightly armored, fully tracked transport vehicle is known for its firepower, mobility, and survivability. Named after the famed World War II general, Omar Bradley, the Bradley fighting vehicle family comes in two main variants, the M2 and the M3. It provides infantry protection against artillery and small-arms fire as well as armored cavalry reconnaissance capabilities. Although its beginning to show its vulnerabilities – and the Army is looking to replace it with the next generation of combat vehicles – the Bradley is battle-proven and as reliable as they come.

However, the most amazing fact is that all Bradleys are amphibious. You heard me right, with the help of a compartmentalized, continuously pressurized inflatable pontoon, these vehicles can swim.

Its wide stance and 600 horsepower turbocharged Cummins diesel engine give the M2 Bradley the speed and mobility to navigate both urban and open terrain. Capable of reaching speeds approaching 40 mph, the Bradley is quick and mobile enough to keep up with the M1 Abrams tank, providing a formidable duo.

Although plagued by cost overruns and scope creep during development, the M2 Bradley eventually got on track. Its total program cost is $5.6 billion, with a per-unit cost of over $3.1 million.

At the time it was introduced, the Bradley was the first infantry fighting vehicle with a fully-stabilized main gun.  Its M242 25mm Bushmaster chain gun fires armor piercing, high explosive munition at 200 rounds per minute and at distances up to 2,000 meters. Mounted next to the Bushmaster is a M240C machine gun, firing 7.62mm rounds. It’s also equipped with an anti-tank TOW missile, effective up to 3,750 meters (2.3 miles).

Infantry can fight from inside the vehicle using modified M-16’s mounted in firing ports or may dismount from the rear door of the M2 version to fight on foot.

This beast is an essential part of the U.S. Army’s Armored Brigade Combat Team (ABCT).  Crewed by a driver, gunner, and commander who train and qualify as a single unit, the M2 Bradley safely transports infantry, provides supporting fire, and destroys threatening enemy vehicles.

The M2 Infantry Fighting Vehicle (IFV) carries a six-man infantry team, while the M3 Cavalry Fighting Vehicle (CFV) is basically an armored reconnaissance vehicle carrying a pair of scouts, additional radios, and ammunition.  In fact, the only noticeable differences between the M2 and the M3 are the missing external M-16 firing ports on the M3.

The Bradley is deployable worldwide and can be transported by truck, rail, ship, and cargo aircraft such as the Boeing C-17 Globemaster III.

Manufactured by BAE systems, the Bradley Fighting Vehicle began its Army service in 1981. Over the last three-plus decades, it has undergone a variety of major upgrades to add capabilities and improve survivability.

In Operation Desert Storm, it’s rumored that more enemy armored vehicles were destroyed by Bradleys than by Abrams tanks.

The newest Bradley versions, the M2A3 and the M3A3, feature digitized electronics for network connectivity, communication, and optimal situational awareness within the ABCT.

The Army is currently planning a replacement for the Bradley and other legacy combat vehicles. 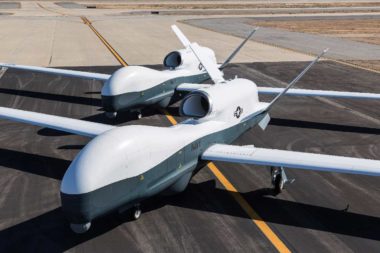