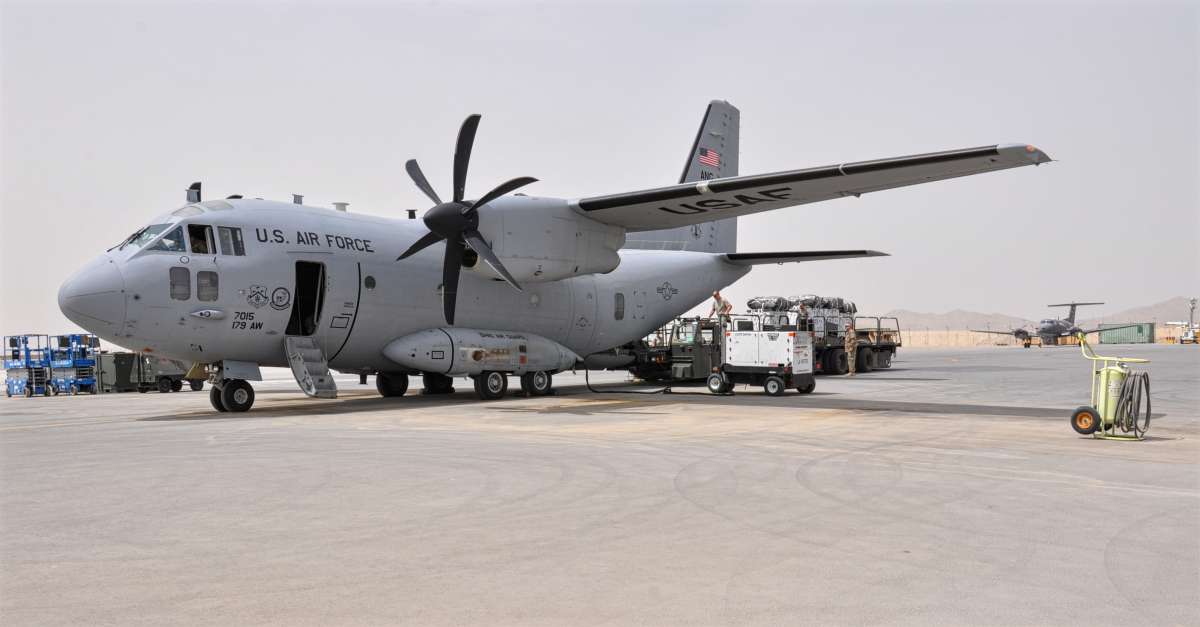 Designed for operation in austere environments, the C-27J Spartan airlifter is the ideal solution for transporting troops and equipment to and from Forward Operating Bases. Developed through a collaboration between Alenia and L-3 Communications, this tactical airlifter was originally commissioned through a U.S. Army and U.S. Air Force Joint Cargo Aircraft competition. Of the 21 Spartans that exist in the military today, 14 are in the process of being delivered to the U.S. Coast Guard to support Search and Rescue missions, while the other seven are used by the U.S. Special Operations Command (SOCOM) for “training purposes.”

The C-27J Spartan was designed to be a juiced-up successor to the Alenia G.222 (U.S. Military C-27A). To add more power to the airframe, the 3.4K shp T64G engines of the G.222 were replaced with 4.5K shp Rolls Royce AE 2100’s, identical to the one’s in the C-130J Super Hercules, and the number of propeller blades was increased from four to six. These upgrades extended the flight time by 35% and pushed the maximum airspeed up by 15%.

Alenia Aeronautica and Lockheed-Martin began plans to design a versatile airlifter together in 1996. It was to be based off of Alenia’s G.222 transporter and given the designation C-27J based off the G.222’s C-27A military designation in the U.S. This new aircraft was to incorporate many of the advanced features of Lockheed-Martin’s C-130J Super Hercules, such as a glass cockpit, more powerful engines, and an upgraded cargo compartment. The avionics architecture was also updated to comply with the MIL-STD-1553 standard, introduced by the U.S. Air Force in 1973 – upgrades that the Air Force did themselves when they purchased their fleet of G.222’s in 1990.

New Aircraft For The National Guard:

In 1997, Alenia and Lockheed-Martin officially joined forces to form Lockheed-Martin Alenia Military Tactical Transport Systems (LMATTS) whose sole mission was to develop the C-27J Spartan. Wanting to replace several of their aging fixed-wing transporters in the National Guard and Air National Guard with a single airframe, the U.S. Army and U.S. Air Force announced the Joint Cargo Aircraft (JCA) competition in 2006. LMATTS split shortly after when Lockheed-Martin announced plans to enter their C-130J into the competition against the C-27J Spartan.

After parting ways with Lockheed-Martin, Alenia Aeronautica partnered with L-3 Communications to form Global Military Aircraft Systems (GMAS) to officially offer the C-27J in the JCA competition. The C-130J Super Hercules was later disqualified from the competition after it failed minimum mission requirements. The Spartan won out against Raytheon and EADS North America’s C-295 and, in June 2007, the Pentagon awarded GMAS a $2.04B contract for 78 C-27J’s; 54 for the Army National Guard, and 24 for the Air National Guard.

The U.S. Army received its first C-27J in September 2008 and L-3 began aircrew and maintenance training shortly thereafter at Georgia National Guard Flight Facility in Robin’s Air Force Base, Georgia. In May 2009, less than two months after receiving their second C-27J Spartan, the Army elected to relinquish the entirety of their allotted Spartan fleet to the Air Force/Air National Guard. This cut the Department of Defense’s order for 78 planes down to just 38. The Air National Guard had four C-27J’s in its possession by July 2010, with plans to achieve initial operational capability by that October.

The 27J’s got their first taste of action in August 2011 at Kandahar Airfield, Afghanistan. Operating under the tactical command of two Army aviation units, the 159th and 25th Combat Aviation Brigades, the C-27J’s proved to be effective in alleviating the stress on the Army’s CH-47 Chinook’s by delivering containers of food, blood, water, and ammunition to special forces troops, often in limited visibility and adverse weather.

Citing an excess of airlift capabilities, the DoD announced in January 2012 that it would be divesting its entire fleet of C-27J Spartan aircraft. The C-27J was originally pitched as fulfilling a niche role that other airlifters such as the C-130J could not; namely, short-runway landing and takeoff operations in rough terrain. In practice, however, the Super Hercules proved more versatile and easier maintained than expected. Therefore, the C-27J program was scrapped.

The cost of maintaining the C-27J, which was about $100M more over its lifetime than the C-130J, was also cited as a major motivation for abandoning the airframe. The Air Force released a statement in March 2012 formally announcing the Spartan’s retirement in Fiscal year 2013. The C-27J deployed on it’s first and final domestic support mission with the Air National Guard in November 2012 to aid in the Hurricane Sandy relief effort.

By November 2013, 12 of the 16 C-27J’s that the Air Force received were sent to the “boneyard” in Davis-Monthan Air Force Base, Arizona where they were kept under Type 1000 storage. This specification requires that the planes be kept in near-active condition. Another five airframes were still in the production process, and it was determined more costly to stop production early rather than cancel the orders mid-build. Therefore these five 27J’s were to be sent directly to the boneyard upon final assembly. Around this time, Alenia also announced that it would not provide support for any C-27J’s resold to international customers in competition with future orders. That meant the U.S. needed to find a new home for these planes in a different government agency, or resign to let them rot away in storage.

Three separate federal agencies, namely the U.S. Coast Guard, the U.S. Special Operations Command (SOCOM), and the U.S. Forest Service, all expressed interest in acquiring the discarded aircraft as early as July 2013. In late 2013, the decision was made to deliver the seven C-27J’s not in storage to SOCOM and to transfer the remaining 14 planes to the U.S. Coast Guard. Thus, cancelling their outstanding orders for the HC-144 Sentry – a move that saved the USCG and estimated $500-800M.

The US Coast Guard received their first Search-and-Rescue ready HC-27J in April 2016. These aircraft are joining the USCG’s medium range surveillance fleet in patrolling, disaster response, and tactical transport missions.

Targeted as a replacement for their aging CASA 212’s, the C-27J’s under the command of SOCOM are still technically considered training aircraft. However, it is worth noting that SOCOM has shown interest in acquiring a covert-infiltration capable variant of the C-27J Spartan in the past. They could upgrade their current fleet to this AC-27J configuration by retrofitting the airframes with 30-40mm guns, full motion cameras, and precision-guided munitions.