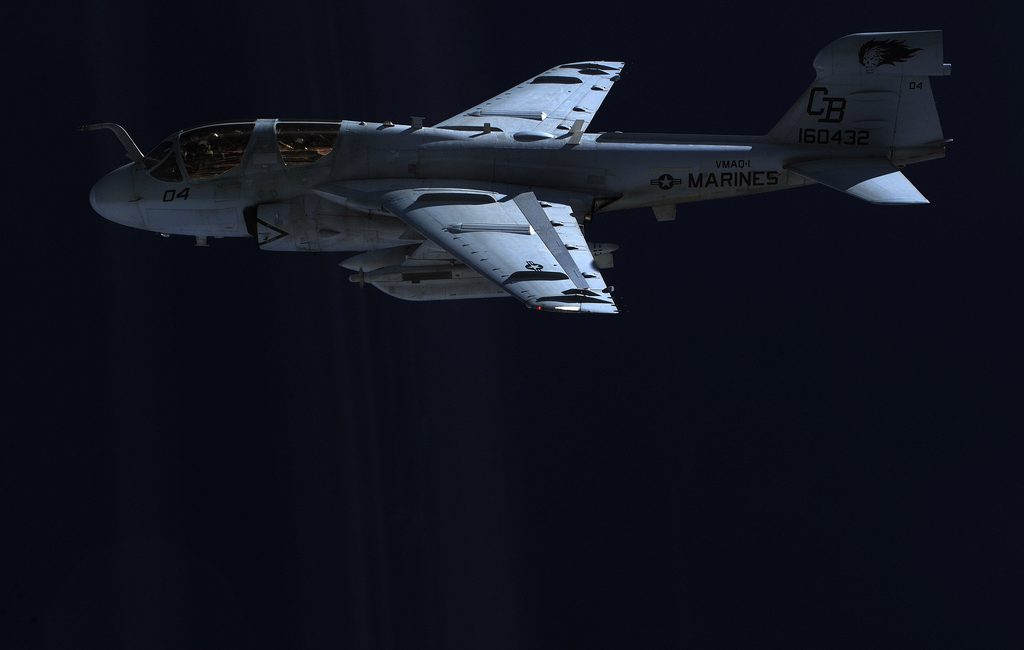 The Marine Corps’ bond with the EA-6B Prowler began when it touched down on Marine Corps Air Station Cherry Point, N.C in 1977. The Prowler replaced the EA-6A Intruder — the former premiere electronic warfare aircraft during the Vietnam War. Since then, the Prowler has participated in every named American conflict. Much of the EA-6B Prowler history is American history.

“[As] one of the last naval flight officers assigned to VMAQ-2 to fly the EA-6A Electric Intruder before the Prowler transition, I had the opportunity to fly and operate the manually controlled EW and [electronic attack] systems that earned the [electronic and photographic] community their stellar EW reputation over the skies of North Vietnam,” said Lt. Col. (Ret.) Rick Johnson, former Prowler pilot with VMAQ-2.

The primary mission of the EA-6B Prowler is suppression of enemy air defenses in support of strike aircraft and ground troops. The Prowler interrupts enemy electronic activity and obtains tactical electronic intelligence within the combat area.

“You’re still flying the same aircraft that was flown 40 years ago. No other tactical jet aircraft in the Marine Corps has ever lasted that long.”

12 Marine Corps Prowlers flew 516 flight hours in Operation Desert Storm in 1991 without sustaining any losses. Fast forward to 2007, the Prowler took part in anti-improvised explosive device operations in Afghanistan by jamming remote detonation devices. The Prowler saved countless lives in the process. In 2013, VMAQ-1 transitioned to a training squadron to support future Prowler operations such as VMAQ-3 and VMAQ-4’s missions over Iraq in 2014.

“The aircraft being almost 50 years old in terms of design does make it a little more difficult to fly versus some of our newer aircraft such as the [F-35 lighting II],” said Maj. Nathan Baker, an operations officer with MAG-14..

One VMAQ squadron a year will deactivate until the completion of the Prowler’s retirement in 2019. The EA-18G Growler will take over primary duties for electronic warfare aircraft with the U.S. Navy.

“I’m excited for the transition and for the aircraft to continue its service until its sundown,” said Baker.
The electronic warfare community will be saying goodbye to a legacy aircraft in 2019 when Prowler touches down for the last time. The twin-engine, mid-wing configured, long-range, all-weather aircraft has supported U.S. Marine Corps and coalition forces worldwide since 1977.

See these stunning images of the EA-6B Prowler and read these facts about the Prowler, too.