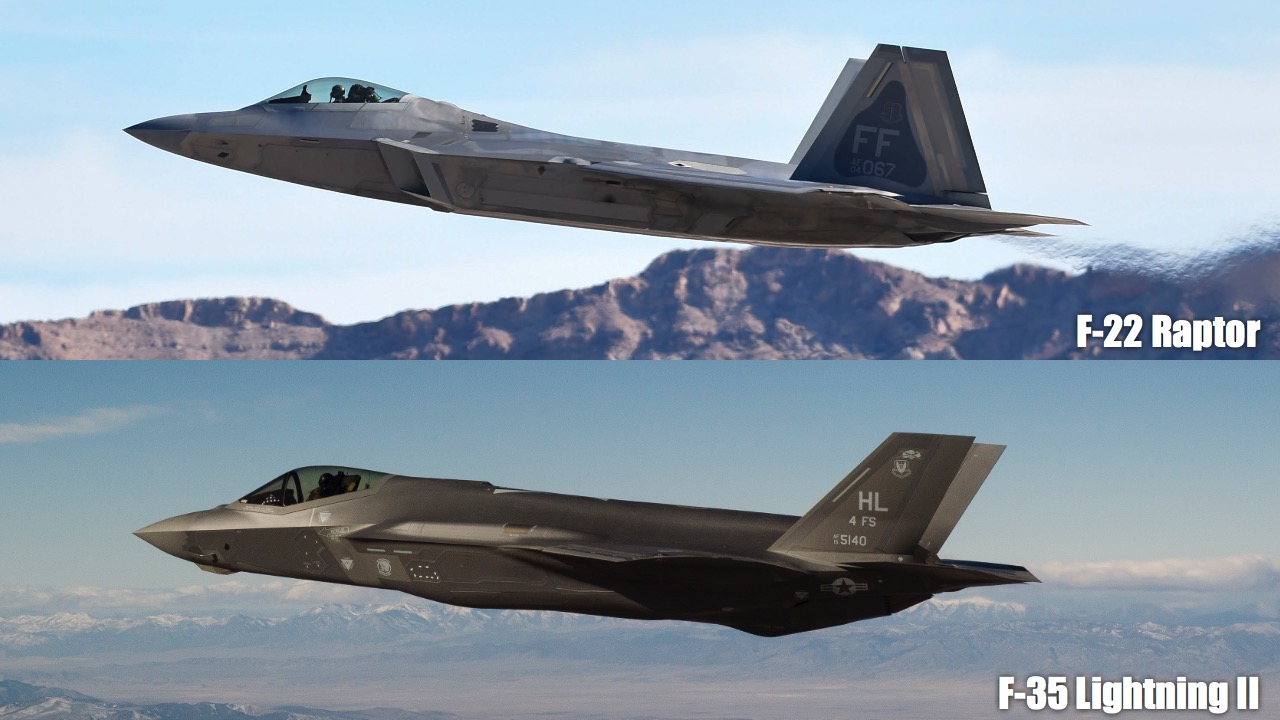 The F-22 vs F-35. On one hand, you’ve got the world’s premier aircraft in air dominance. On the other hand, you’ve got the most expensive weapons procurement program in world history. Even though they’re alike in so many ways, make no mistake – the F-22 Raptor and F-35 Lightning II are two totally different birds.

These two aircraft can carry out a lot of the same missions, but the F-35 was ordered into production to fill in the gaps that that F-22 can’t fill. Likewise, the F-35 has shortcomings where the F-22 shines. The bulk of what makes the F-22 and the F-35 different is cost and capabilities.

Let’s compare the cost of the F-22 vs F-35. The F-22 is expensive. The U.S. Air Force had to stop production early on the F-22 because of soaring project costs. The cost of one aircraft alone is an estimated $334 million which includes research and development (unit cost of $150 million). The Air Force wanted 700 F-22s to be produced but had to cancel production just shy of 200 because they were already over-budget. The flight cost per hour for an F-22 is roughly $60,000.

With a price tag that high and no immediate threat in the open skies that require the most dominant fighter jet in the world, the U.S. Military needed to come up with a more viable, less expensive long-term solution.

The Pentagon is currently under contract to buy 90 new F-35s for $8.2 billion from Lockheed Martin. Over 2,400 F-35s are expected to be produced for each the Navy, Air Force and Marines once the program is all said and done. One aircraft costs an estimated $91 million. The flight cost per hour is roughly $67,000.

What about production of the F-22 vs F-35? With the F-35s superior ability to engage targets on-land combined with its much cheaper manufacturing costs, the U.S. Military will be producing the F-35 Lightning II until 2037. The last F-22 produced was delivered in 2012. 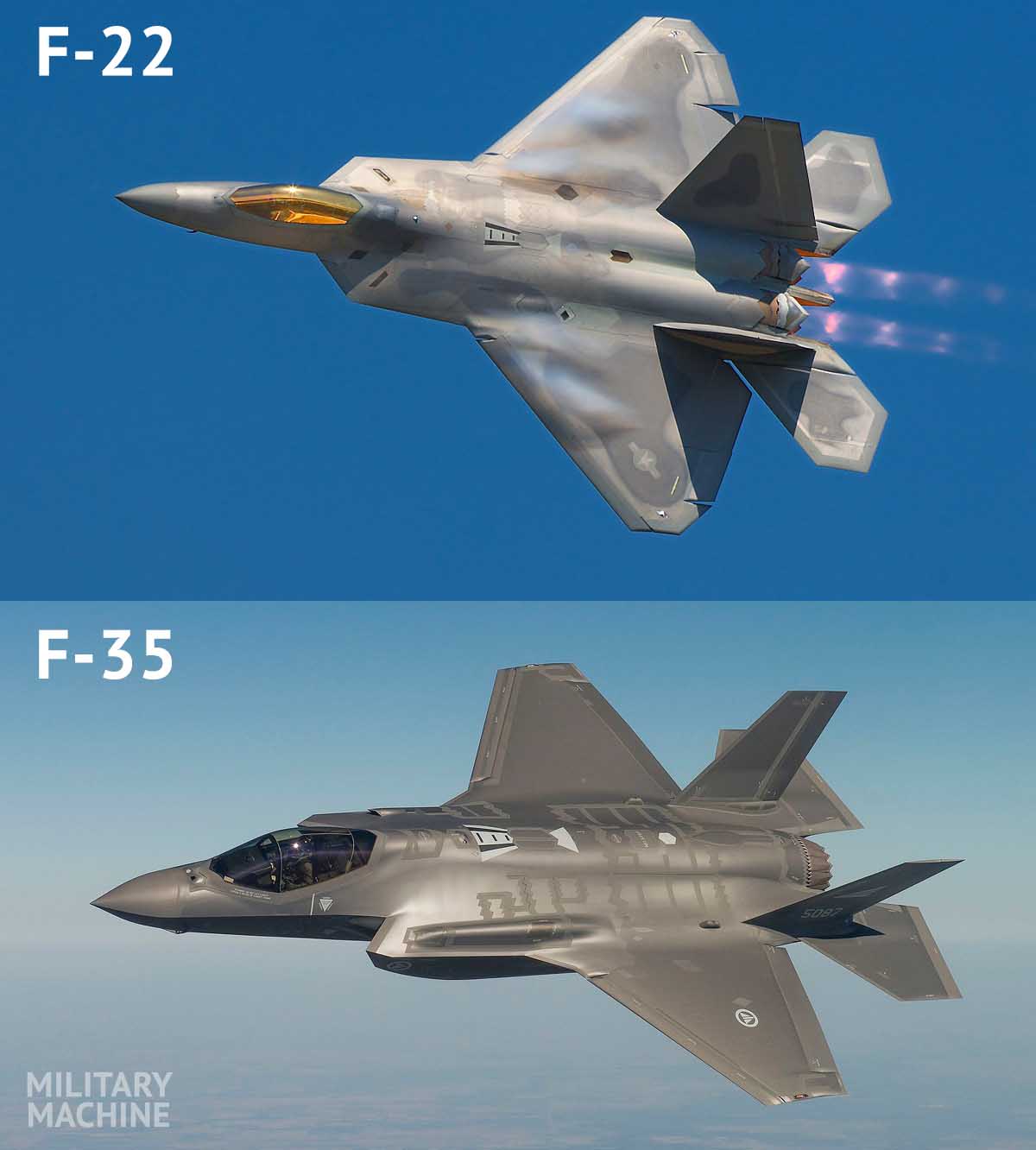 Let’s look at the avionics of the F-22 vs F-35. The Raptor is outfitted with a specially-designed AN/APG-77 radar from Northrop Grumman. It gives the F-22 a nearly impossible advantage – it can locate and engage the enemy without that aircraft ever even seeing the F-22 on its radar. The AN/APG-77 uses an active and electronically scanned antenna array of 2,000 transmitter/receiver modules. It can also communicate data information over a secure link and jam enemy electronics system.

The F-35 Lightning is outfitted with Northrop Grumman’s latest avionics system, the AN/APG-81. The 81 model contains all the same air-to-air modes as the AN/APG-71 but also includes: high-resolution mapping of the ground, Advanced Electro-Optical Targeting System (EOTS), and a custom designed AN/ASQ-239 Barracuda electronic warfare system. These systems, along with others, provide the F-35 Lightning with never-before-seen 360 degrees situational awareness. The F-35 also contains multispectral imaging countermeasures. Now let’s look at the size and speed of the F-22 vs F-35.

In every aspect of size – height, weight, wingspan, wing area, weight – the F-22 Raptor is bigger than the F-35 Lightning. See the specs below for details.

The biggest physical difference in the capabilities between the F-22 vs F-35 are their weapon bays.

The F-35, designed for a more versatile engagement approach, also has a unique weapons bay. The bay on the F-35 is deeper and narrower than the F-22, in order to carry heavier bombs mean for air-to-ground combat. The F-35 can carry any of the following air-to-ground bombs: AIM-120 AMRAAM, AIM-132 ASRAAM Brimstone anti-tank missiles, cluster munitions, Joint Direct Attack Munition and Paveway series of bombs. Some of these weigh up to 2,000 pounds. The heaviest bomb an F-22 can handle is 1,000 pounds. Scroll down to see an infographic comparing the F-22 vs F-35. 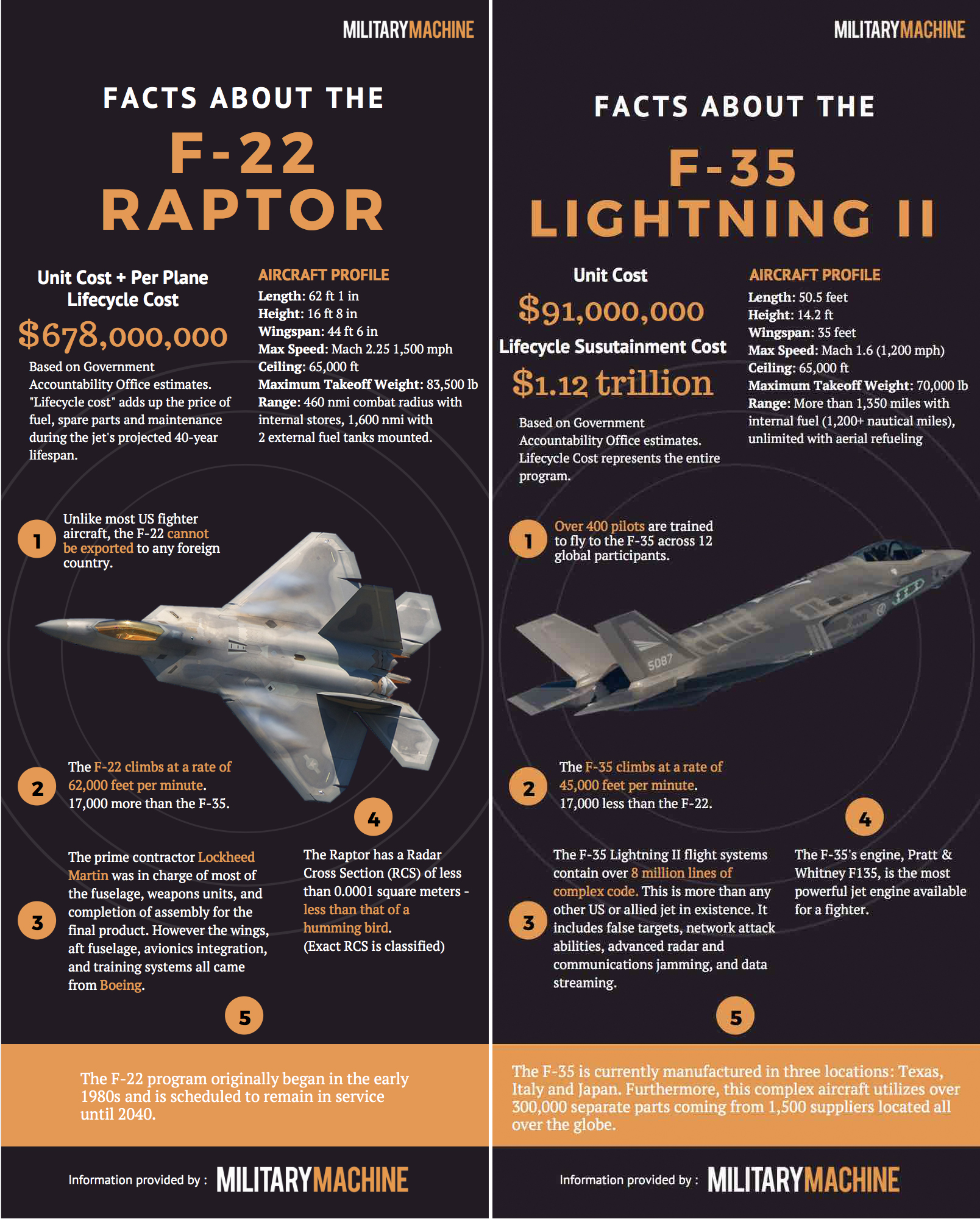 Watch This Comparison Between the F-35 and the F-22

Lockheed Martin
|
Air Force
This content is for members.