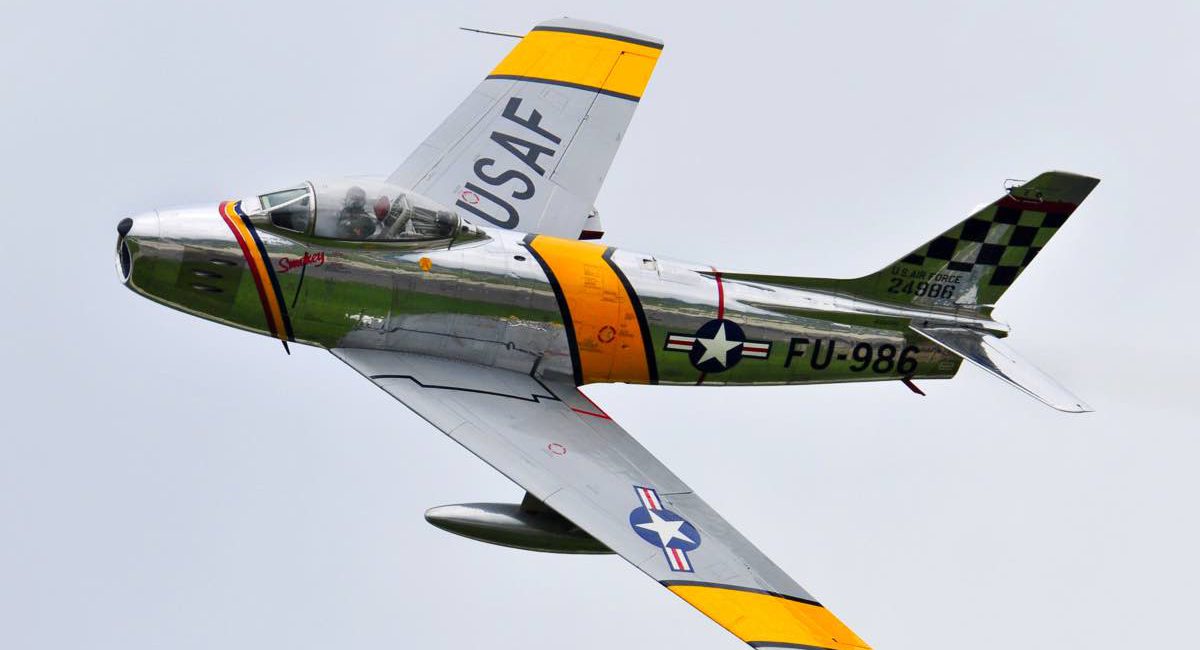 Allied and Axis forces produced the first generation of jet fighter aircraft in the waning days of World War II. The US Air Force continued to develop jet aircraft in the late-1940s, albeit at a slower pace than their counterparts in the Soviet Union. About four months after the Korean War started, China and the Soviet Union began providing support to the North Koreans. The swept-wing, Soviet-built MiG-15m quickly outclassed the older designs flown by US forces. The US countered with the North American F-86 Sabre, and it became the most successful fighter aircraft of its era.

The North American F-86 Sabre began production in the US in 1947 and was first operational with the US Air Force by 1949. The F-86’s 35-degree swept wing design allowed for higher speeds and more maneuverability in flight. This design led to greater overall performance than the existing jets produced by other manufacturers. The Sabre had a maximum speed of 687 mph (0.9 Mach) at sea level with a full combat load. It could reach an altitude of nearly 50,000 feet and had a range exceeding 1500 miles when equipped with external drop tanks.

The F-86’s armament wasn’t vastly improved over other fighter jets of the era, but it’s speed made it far more dangerous to the enemy. The Sabre carried six .50 caliber machine guns with a total of 1800 rounds on board, up to 36 unguided air-to-ground rockets mounted on external pods, and a maximum of two 1000-pound bombs. Like the rocket pods, the bombs attached to external hard points; a total of four were fitted to the aircraft. Standard load-out would consist of two 200-gallon fuel tanks on the inboard pylons, and the 1000-pounders on the outer pylons. Modifications were made over the service life of the aircraft allowing it to carry napalm canisters and a single tactical nuclear weapon if needed.

Relatively, the F-86 was cheap. Initial development of the fighter began during World War II while American industry was making remarkable technological achievements. Furthermore, some of the jet technology of the time was appropriated from the defeated Germans, with the help of the British. Nonetheless, one would think that a jet this capable would have been astronomically expensive. Adjusted for inflation, one F-86 Sabre cost approximately $2.3 million in 1950. A North American P-51D was the equivalent of $500,000. For the time, the new jet wasn’t cheap. By comparison, a brand new fifth-generation fighter like the F-35 Lightning II costs the military $122 million today.

Over the course of the Korean War (1950 – 1953), the F-86 proved to be the superior aircraft when pitted against the MiG-15. At the outset of the war, most US and UN aviators were experienced World War II pilots. Because they were flying less capable aircraft than the nimble MiG, they were at a distinct disadvantage. The communist forces were more successful because the MiG was simply a better aircraft than the Shooting Stars, Thunderjets and F9F Panthers. When the Sabre was brought into the Korean theater, the tables turned quickly even as the MiG pilots gained experience.

By the end of hostilities in 1953, the F-86 held a claimed 10:1 kill ratio over the MiG-15. Historians agree that this ratio is exaggerated, however it is safe to say that the F-86 proved to be more than the MiG could handle. Of the 40 pilots who achieved “Ace” status (a minimum of 5 kills), 39 flew the F-86. Records show that UN forces lost 78 Sabres during the war, while communist forces lost more than 650 aircraft.