The Japan Maritime Self-Defense Force employs two of the largest warships in the world with these 814 foot ships, the Izumo and the Kaga. The Izumo-Class are the largest military ships in the Japanese fleet since WWII and carry a regular compliment of 970. Despite its size, the Izumo-Class Helicopter Destroyer is a defensive ship. Due to Japan’s post-World War II pacifist constitution, it carries anti-sub and anti-ship weapons, but is not fitted with any surface attack weaponry. The ship’s strength lies in aircraft capacity. The Izumo-Class can carry up to 28 aircraft and boasts five helicopter landing pads for simultaneous take-off and landing. Additionally, there is cargo space for up to 50 vehicles. Powered by four gas turbines generating 112,000 horsepower, the vessel can reach a speed of 30 knots.

This 827-foot-long Russian gunboat is primarily an offensive ship. Powered by 140,000 horsepower of nuclear marine propulsion and oil-fired steam turbines, it has a top speed of 32 knots and a cruising speed of 20 knots. The largest surface combat ship in the world is equipped with an impressive array of anti-ship missiles, surface to air missiles, super-sonic anti-ship missiles, torpedoes, and fixed guns. 76-millimeter armor plating protects the reactor. It also carries 3 helicopters and a crew of 710. Originally, the Soviet Union commissioned 4 of these heavy nuclear-powered guided missile cruisers. Currently, only one, the Pyotr Velikiy, remains in active service with the Russian Navy. Another, the Admiral Nalhimov, is undergoing renovations and is expected to return to duty in 2018 to take its place among the largest warships in the world. 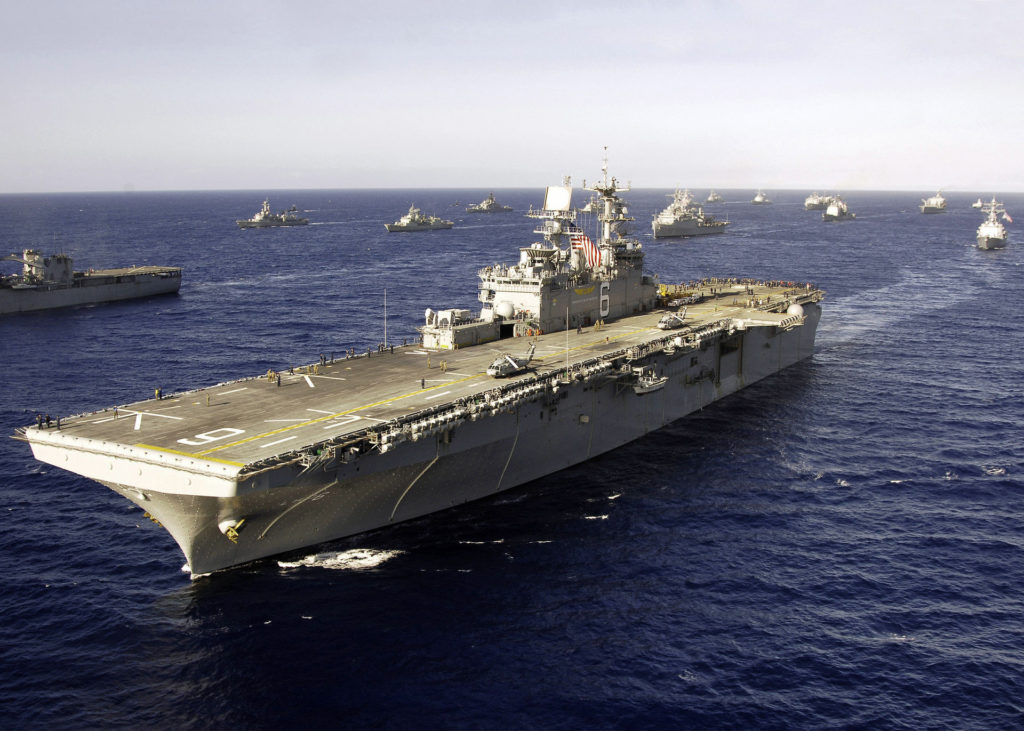 In terms of number of ships–and the number of largest warships–the United States Navy takes top honors. Between 1989 and 2009, eight Wasp-Class Amphibious Assault ships were commissioned and all eight remain in active duty. Like other amphibious assault ships, it is designed to land on an enemy beach, deploy ground forces, and provide support as they engage hostile forces. At 843 feet, a Wasp can carry a Marine Expeditionary Unit (MEU) of 2000 Marines with tanks, light armored vehicles, amphibious assault vehicles, Humvees, light attack planes, helicopters, offensive weaponry, and support supplies. Additionally, each Wasp-Class ship features a 600 bed hospital with six operating rooms. Two steam powered turbines and two electric turbines give this ship a cruising speed of 22 knots.

At 844 feet in length, the America-Class is almost the same size as the Wasp, but is designed with more deck space to accommodate larger aircraft. The United States Navy currently has one of these next-generation amphibious assault ships in its fleet, with another on order (the Tripoli), and an additional nine planned. Commissioned in 2014, the USS America can carry bigger aircraft, tanks, and terrestrial vehicles than a Wasp-Class. Like the Wasp, its main purpose is to carry and land a Marine Expeditionary Unit (MEU) via helicopters and Osprey. The USS America can carry 1,687 Marines and a crew of 994 enlisted and 65 officers. Powered by two gas turbines and two auxiliary propulsion engines, it has a speed of 20 knots.

At 858 feet long, the Charles De Gaulle (originally named the Richelieu) is both one of the largest warships in the world and the flagship of the French Navy, the Marine Nationale. Commissioned in 2001, the Charles De Gaulle is the only aircraft carrier servicing the French Navy. The CDG also holds the distinction of the largest warship in Western Europe and the first nuclear-powered French carrier. With an impressive 543-foot-long flight deck, she can accommodate up to 40 aircraft and a crew of 1,950. Two K15 pressured water reactors (nuclear), two steam turbines and four diesel-electric turbines power the carrier along at a maximum of 32 knots. Over the years, the Charles De Gaulle has undergone a series of updates and renovations and is currently dry-docked for additional refurbishing.

Originally christened the Foch, the Clemenceau-Class of aircraft carrier was commissioned in July of 1963. It was the first carrier designed by France after WWII. Purchased by Brazil in 2000 and christened the Sao Paulo, the 869 foot carrier became the flagship of the Brazilian Navy. As one of the largest warships in history she can carry a total of 39 aircraft – 22 jets and 17 helicopters. 1,274 staff and 64 officers man the ship, with room for an additional 582 airmen. The Sao Paolo achieves a speed of 32 knots via six boilers and four steam turbines. Since acquisition from France, the Sao Paolo has undergone continuous upgrades and repairs, including those from onboard fires in 2004 and 2012. Recently, the Brazilian Navy announced the Sao Paolo will be decommissioned due to the high cost of upkeep on the 54-year-old vessel.

In 2004, India purchased one of four Kiev Class ships decommissioned by Russia (two other Kiev-Class carriers were sold to China as museum pieces and the fourth was demolished). The purchase was interesting in that Russia gave India the ship for free. However, India paid Russia to refurbish, modernize, and outfit the carrier with aircraft and weapons. In November 2013, upgrades and sea trials were complete and the INS Vikramaditya was commissioned.

The renovations increased the size of the ship from the standard 896 feet of the Kiev-Class to 930 feet. One of two carriers in the Indian Navy, the Vikramaditya holds a maximum of 36 aircraft and a crew of 110 officers and 1,500 sailors. Eight turbo-pressured boilers and four steam turbines generate 180,000 horsepower and a speed of 30 knots. The Vikramaditya is also the only India Navy ship to feature an onboard ATM.

Like the INS Vikramaditya, the Liaoning was originally a Soviet ship. The USSR began building the Kuznetsov-Class Carrier in 1985. But the dissolution of the Soviet Union led to a construction halt before it was finished. After lying in disarray for over 10 years, a Chinese company purchased the ship from Ukraine. A slow journey eventually brought it to Chinese waters in 2002. Another 10 years was spent on build completion and modernization before the carrier was finally handed over to the People’s Liberation Army Navy (PLAN).

With a total of 27 years passing between the start of construction and commission, the Liaoning holds the record for the longest construction period for any aircraft carrier. 999 feet in length, the Liaoning is one of the largest warships on earth and the first aircraft carrier in the Chinese Fleet. It accommodates 40 aircraft and a regular crew of 1,960. Propelled by steam turbines, electric turbines, and diesel generators, the ship travels at 32 knots. Like the Izumo, the Liaoning carries only defensive weapons and relies on aircraft for any offensive attack.

At 1001 feet in length, this heavy aircraft-carrying missile cruiser is the largest Russian built military vessel and one of the largest warships in the world. Originally one of two Kuznetsov-Class carriers planned, the Admiral Kuznetsov is the only one of its class complete in Russia. The other was became a Chinese vessel. Commissioned into the Soviet Navy in 1990, the Admiral Kuznetsov is the only active carrier in the Russian Naval fleet. Fitted with defensive and offensive weaponry, a crew of 1,690 man this massive ship. An additional 626 men staff upwards of 50 aircraft, including 18-32 fixed wing planes and 17-24 helicopters. Turbo-pressurized boilers, steam turbines, and diesel generators propel the carrier along at 29 knots.

The largest warship in the world is the Nimitz-Class Carrier. At 1092 feet in length, 23 stories tall, and a flight deck area covering 4.5 acres, the Nimitz-Class Carrier is truly a floating city. The United States Navy has 10 of these massive carriers active in its fleet. Two Westinghouse A4W Nuclear Reactors power these giants at a speed of 30 knots and can generate power for upwards of 20 years before needing to refuel.

Commissioned in 1975 and the Navy’s oldest carrier, the lead ship of this class is the USS Nimitz. The Nimitz and its sister ships can carry 85-90 aircraft – double that of most other military vessels. It commands upwards of 5,000 servicemen, counting the ship’s company and aircraft crew. Kevlar armor protects the ship’s vital areas and a minimum of 16 missile launchers provide additional defense. The newest member of the Nimitz-Class fleet, the George H.W. Bush, was commissioned in 2009 and refurbishment is underway for some of the older ships. It’s clear that these floating fortresses will remain the superstars of the United States Navy, and the largest warships in the world, for the foreseeable future. 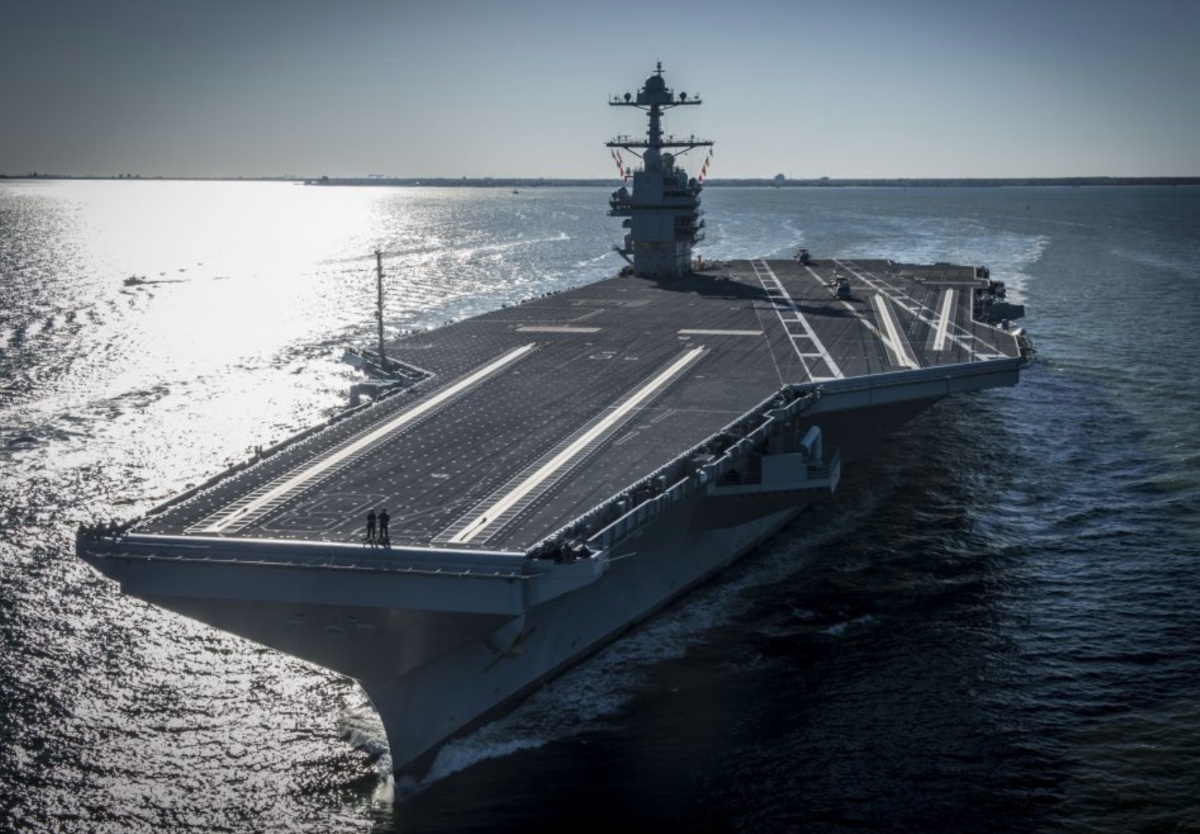 USS Gerald R. Ford is the first carrier in the new Ford-class line of U.S. Navy aircraft carriers. In terms of specifications, the Ford-class carriers are very similar to the Nimitz-class. The ship’s length, beam, flight deck size, speed, engines and aircraft capacity are all roughly the same as its predecessor’s. However, the technology behind these measurements is heightened – greatly. The USS Gerald R. Ford is one of, if not the most, technologically advanced active aircraft carriers in the world.

The island house is smaller and further aft on the ship. This increases space for flight-deck operations and aircraft maintenance. Additionally, the smaller house enables the air wing to launch more aircraft sorties. Also, quality of life improved throughout the ship with better gyms, improved berthing compartments, and more ergonomic workspaces.