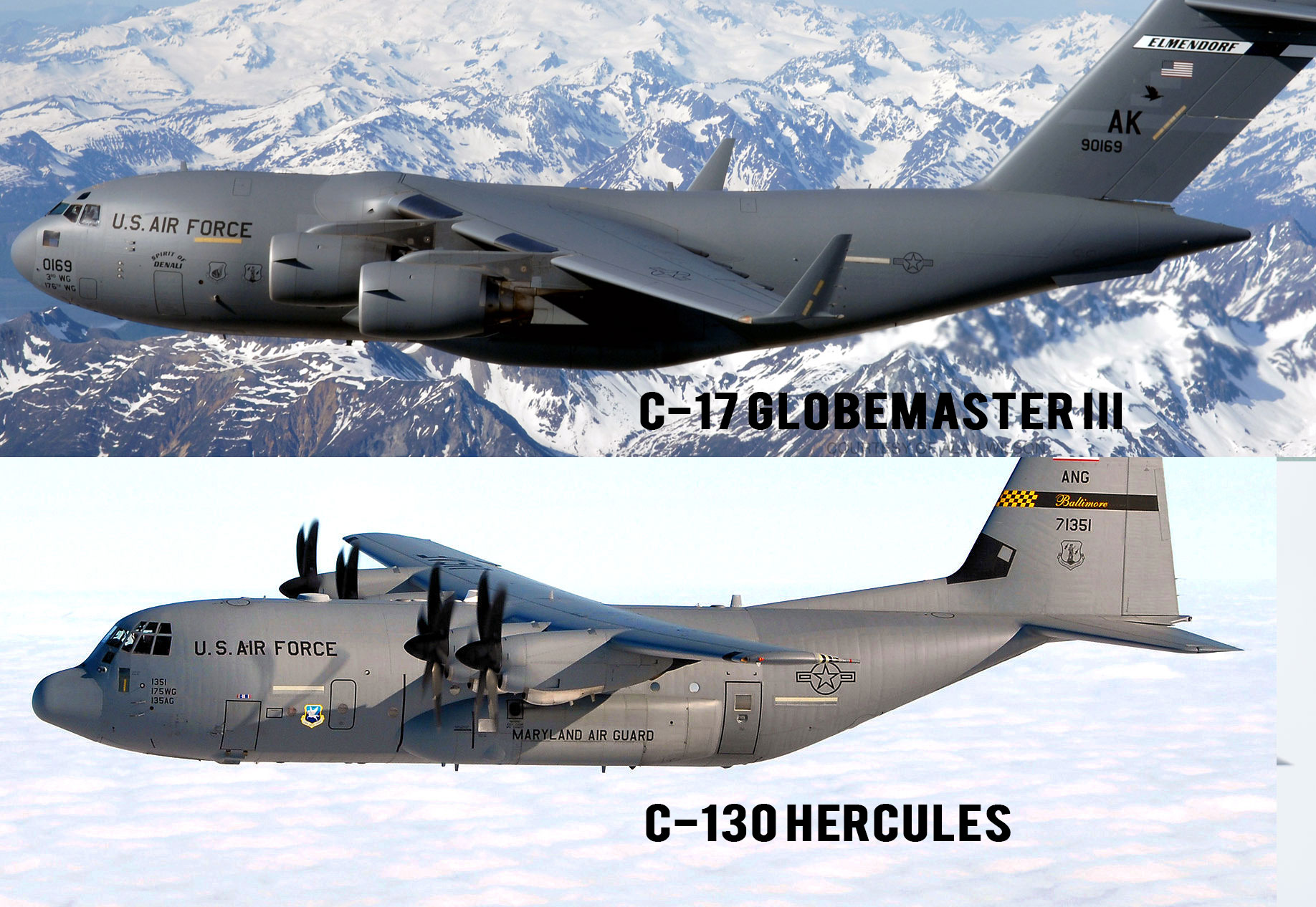 Newer and bigger. That is a pretty good way to describe the C-17 in reference to the C-130. The C-17 Globemaster III measures 174 long, 55 feet one inch tall with a wingspan of 169 feet 10 inches. The C-130E, C-130H, and C-130J – three main variants of the six-decade-old aircraft that are currently active – are noticeably smaller than the C-17. These three C-130 variants measure 97 feet nine inches long, 38 feet, 10 inches tall with a 132-foot, seven-inch wingspan. The C-130J-30, a stretch version with a 15-foot fuselage extension, measures out to be 112 feet nine inches long. While neither of these aircraft comes close in size to the C-5 Super Galaxy – the USAF’s biggest active aircraft and cargo transport plane – the C-17 and C-130 are still large aircraft capable of transporting massive quantities of supplies or troops at a moment’s notice.

In terms of the personnel needed to operate the C-17 vs C-130 – it’s just about the same across both platforms. A crew of three operate the C-17 GlobemasterIII. These three crewmembers are the pilot, co-pilot and loadmaster. Flying with only a crew of three airmen reduces manpower requirements, risk exposure and long-term operating costs. When the mission is geared towards a medical situation, a basic crew of five – two flight nurses and three medical technicians – is added for aeromedical evacuation missions. Medical crew may be altered as required by the needs of patients

In the C-130E/H variants of the Hercules, fice crew members operate the aircraft. The crew consists of two pilots, a navigator, a flight engineer and a loadmaster. For the C-130J/J-30 variants, only three crewmembers – two pilots and loadmaster – are needed. Similar to the C-17, the aeromedical evacuation crew consists of five members as well. Medical crew may be decreased or increased as required by the needs of patients.

The purpose of these two aircrafts is clear: carry heavy stuff, and lots of it. The C-17 was designed with tanks in mind. The Globemaster III is capable of carrying an M1 Abrams Battle Tank, alongside other tactical vehicles and troops. The maximum payload capacity of the C-17 is 172,000 pounds and its maximum gross takeoff weight is 585,000 pounds. The C-130, which pushed the boundaries of massive aircraft in the 1950s, isn’t able to hold as much. Each version of the C-130 Hercules has a maximum allowable payload capacity of right around 43,000 pounds. It’s maximum takeoff weight is 155,000 pounds for the C-130E/H, and 164,000 pounds for the C-130J.

Four Pratt & Whitney F117-PW-100 turbofan engines, which are based on the commercial Pratt and Whitney PW2040 used on the Boeing 757, power the C-17 Globemaster III. Each engine is rated at 40,440 pounds of thrust and includes thrust reversers. These thrust reversers are an impressive engineering feet. They direct the flow of air upward and forward to avoid ingestion of dust and debris. Additionally, thrust reversers provide enough thrust to reverse the aircraft while taxing backwards and create in-flight drag for maximum rate descents.

C-130: Four Allison T56-A-11 or -9 turboprop engines powered the initial production model – the C-130A. Allison T56-A-7 turboprop engines were used in the C-130B. Introduced in August of 1962, C-130Es used the same Allison T56-A-7 engine, but added two 1,290 gallon external fuel tanks and an increased maximum takeoff weight capability. June 1974 introduced the first C-130Hs. The C-130H was outfitted with the more powerful Allison T56-A-15 turboprop engine. Nearly identical to the C-130E externally, the new engine brought major performance improvements to the aircraft. The C-130J, the latest variant to be produced, contains the noticeable difference of a six-bladed composite propeller coupled to a Rolls-Royce AE2100D3 turboprop engine. This version of the C-130 Hercules brings substantial performance improvements over all previous models.

The overarching mission of the C-17 Globemaster is to strategically deliver troops and cargo of all types to main operating bases or directly to forward bases in the deployment area. The C-17 is touted as the ‘most flexible cargo aircraft to enter the airlift force’ byt the U.S. Air Force. Tactical airlift and airdrop missions are among the C-17’s bread and butter. It can transport litters and ambulatory patients during aeromedical evacuations as well.

The tactical portion of the airlift mission is the C-130s main responsibility. The aircraft operates from rough, dirt strips and is the prime transport for airdropping troops and equipment – specifically into hostile areas. Basic and specialized versions of the aircraft airframe perform a diverse number of roles, including airlift support, Antarctic ice resupply, aeromedical missions, weather reconnaissance, aerial spray missions, firefighting duties for the U.S. Forest Service and natural disaster relief missions.

A large aft ramp and door system accommodates nearly all of the Army’s air-transportable equipment. Cargo can contain a 69-ton M1 Abrams main battle tank, armored vehicles, trucks and trailers. Also, the cargo floor has rollers that can be flipped from a flat floor which accommodates wheeled or tracked vehicles as well as rollerized conveyors which accommodate palletized cargo. The C-17 is designed to airdrop 102 paratroopers with their accompanying equipment.

Whether you continue to browse cargo aircraft, like these awesome images of the C-130 or these little-known C-17 facts, or if you’re looking for something faster-paced, like a comparison between the F-22 and the F-35, we appreciate you spending time with us on our site!