The two predominant fighter jets for the two predominant world military powers’ seem like a perfect match. Where the American F-22 Raptor excels, the Russian Su-35 shies away. And where the Su-35 is most powerful, the F-22 is outmatched. Call it a grudge match, or a stalemate, or a hypothetical – because that’s all it is at this point – but however you phrase it, comparing the F-22 vs. Su-35 is an exciting venture.

As far as public knowledge goes, there has only been one run-in between these two flagship fighters. In December of 2017, two F-22s engaged two Su-25’s over Syria after the Russian jets crossed the de-confliction line – entering territory claimed by the U.S. At one point a Su-35 became involved was treated to a warm welcome by an F-22 as well. The American fighter jets fired flares as warning signs, and there was even a near mid-air collision, according to the U.S. Air Force. But at the end of the day, the Russian jets turned tail and went home. Nothing escalated to a combative degree – but there was several serious minutes of engagement between these two fighter jets.

That’s all the anecdotal evidence we have for now. Before you get a complete sense of what each fighter jet brings to the table, here are the quick hits:

The Lockheed Martin F-22 Raptor is considered by many to be the most advanced fighter ever made and the very definition of air superiority. This is great news for Lockheed Martin, as it was their mission to produce a fighter whose capabilities had never been seen before. No other fighter combines the level of stealth, speed, maneuverability, weaponry, and avionics of the Raptor. The F-22 entered service in 2005.

The Sukhoi Su-35, designated as ‘Flanker-E’ by NATO, is a Russian-made single seat, twin-engine multirole fighter. It is based on the previous existing design of the Su-27 Flanker. The Su-35 entered service in 2007. 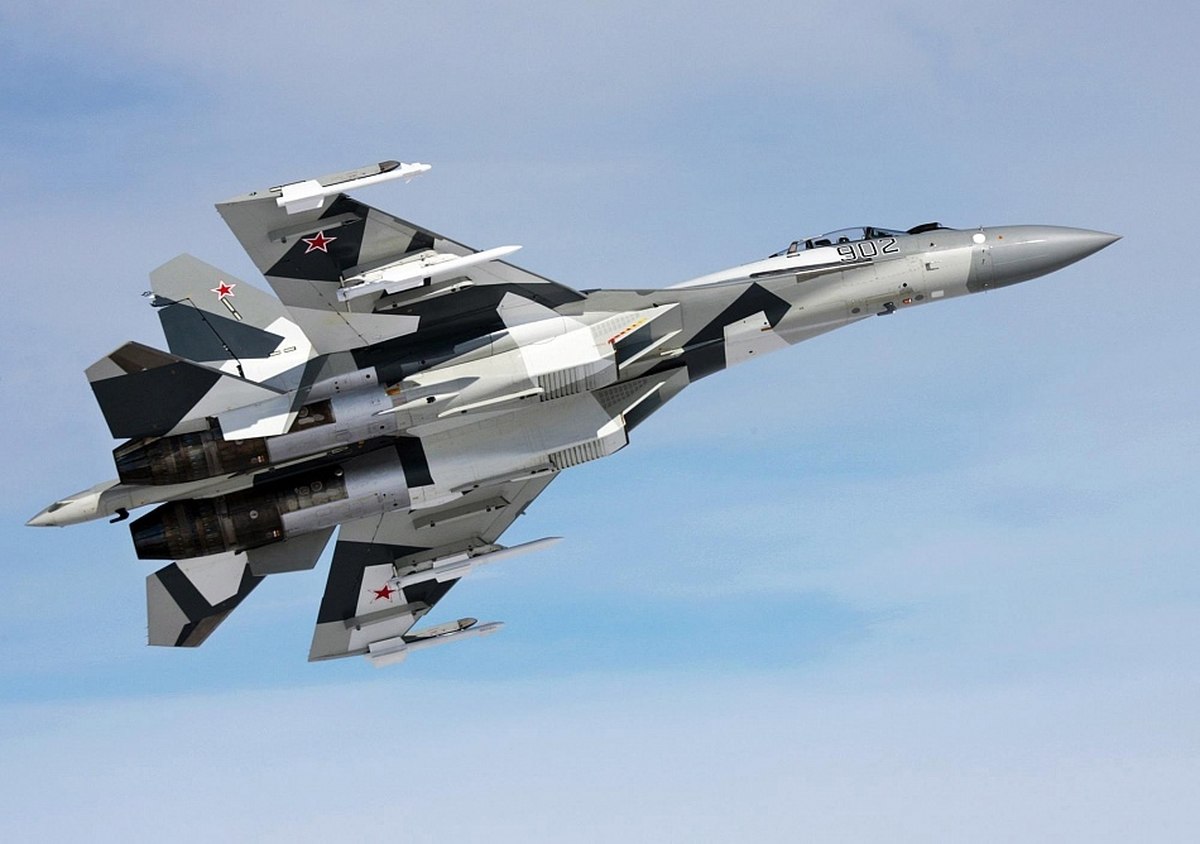 This is the meat and potatoes. How would these two jets fare against each other in a fight? Well, the result of a dogfight might not go the Americans’ way but any conflict other than a face-to-face fist fight would likely be the end of the Su-35. The F-22 isn’t designed to dogfight. It’s weapons are held internally. It’s stealth and radar advances are designed to destroy the enemy before the enemy is even aware of the F-22’s presence.

The F-22 Raptor is outfitted with:

The Su-35 Flanker-E is outfitted with:

While the Raptor has received criticism for being too expensive (estimated cost per aircraft is $334 Million, including R&D) and specialized to be of practical use to the US Air Force, it has proven to be a capable and unmatched leader of the skies. Production of the F-22 fleet ceased long before the original requirement of 700 or so units were complete due to budget cuts, and there are only 183 in the Force today. Maintenance and modernization of the existing fleet, however, is expected to continue for the thirty year life-time of the jets.

The Sukhoi jet on the other hand seems to be pricey for a fourth-generation aircraft, yet it pales in comparison to the F-22 price tag. We can’t be completely certain the exact number on the Su-35, but estimates from experts in the field have determined the Su-35 cost to be anywhere from $55-65 million per aircraft (not including R&D).

The F-22 Raptor’s radar cross section is reportedly anywhere from the size of a marble to the size of a bumblebee – not a huge difference. The Su-35’s long-range air-to-air options are quite ineffective against this size of cross-section. Also, the F-22 Raptor’s avionics suite can engage counterparts long before eyes can lock on to an enemy.

Defense analyst Justin Bronk had this to say about the radar/stealth of each fighter:

“Whilst the Su-35 does have the hypothetical capability to detect the F-22 at close ranges using its IRST (Infa-Red Search and Tracking) and potentially the Irbis-E radar, both sensors would have to be cued to focus on exactly the right part of sky to have a chance of generating a target track. By contrast, the F-22 will know exactly where the Su-35 is at extremely long range and can position for complete control of the engagement from the outset with superior kinematics.”

The reason the F-22 is difficult for enemy aircraft to detect both visually and via radar from all sides, rather than just from the front is due to it’s radar technology. It’s outfitted with Active Electronically Scanned Array (AESA) Radar technology and a carefully designed airframe that reduces visibility while confusing enemy radar detection. The specific type of AESA radar carried on F-22s is Northrop Grumman’s AN/APG-77, which uses “agile frequency” beams and allows the Raptor to slip in and out of combat quickly and easily.

Want to test your knowledge of different military aircraft? Take our quiz and see if you can identify the different models.